Although Dacia has not prepared something spectacular for the Paris Motor Show, the Romanian car manufacturer has new targets to achieve with the aid of Renault. Dacia will grow significantly in the coming years, continuing to improve its offer. The first positive signs will appear in the next few years when the Romanian brand will seek to adopt a slightly more attractive design, without departing from the identity that has created so far.

Laurens van den Acker, the chief designer of Renault, spoke in Paris, in an interview for  Automarket about the future philosophy that the car manufacturer of Pitesti will adopt. "Dacia will evolve in the coming years with the aid of the design center in Bucharest. The Romanian brand will be different from the Renault brand, because the French offer a more Latin, emotional and sensual design for the segment, while Dacia offers a Eastern European design that is more rational and robust. This approach of the design will not change in future, and the differences will become increasingly larger " said Laurens vand den Acker.

The head of design of Renault thinks that Duster is the most successful product of Dacia, showing an attractive look that is also robust and solid. "This means that the future design of Logan and Sandero will be based on what we see today in Duster. Because we were pressed for time we had to present some existing models like Sandero, which has received the Dacia logo. The future generations, however, will have several changes in the design. The future Logan will adopt a modified front and rear aspect seriously. If the reaction is positive, we have a third-generation Logan with a design radically different from what we see today, "concluded van den Acker. 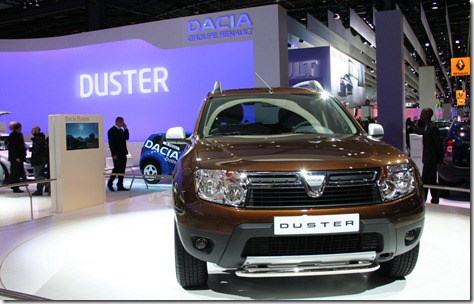