Renault has produced the 1 million Duster unit, for years after the launch, at the Curitiba factory in Brazil. The anniversary Duster model will be delivered to a customer in brazil, announced the French officials.

The Duster model is produced in five factories under the Renault and Dacia brands and is being sold in over 100 countries. 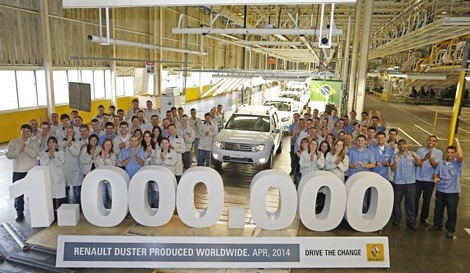 “ The Duster is a success story. Under the Renault brand, the Duster answers perfectly to customer requirements and has contributed to expansion on international and emerging markets. Meanwhile, the Dacia version of Duster, marketed in Europe and the Mediterranean markets has successfully attracted new customers through practical and real qualities of a SUV at an affordable price, "said Arnaud Deboeuf, the director of Renault Entry Program.

According to Renault officials, the fact that they have been sold 1 million Duster units in just four years Duster highlights the success of the Romanian model.

Under the Renault logo are sold the Duster models adapted to the cold climate in Russia, a version that works with many types of fuels in Brazil, and a a right hand drive version for Indian market. The Dacia versions are as popular due to the spacious interior and the SUV qualities, according to the Renault press release.