The Dacia factory in Pitesti manufactured the 400,000 Duster unit announced the official Dacia site. The 400,000 Duster unit is a 4×4 gray platinum Laureate version, powered by a 1.5 dCi engine with 110 HP and that will be delivered to a customer in France, the most important export market for the Dacia brand. 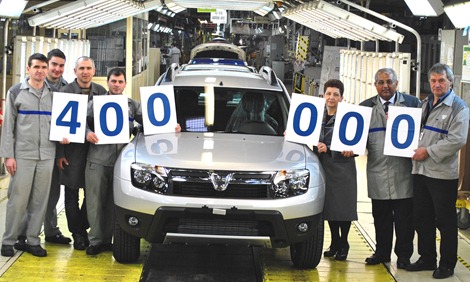 Taking into account that the average price of a Duster is 15,000 euros, the value of the unit produced by Dacia from 2010 until today is more than 6 billion euros. Currently, the Duster represent 45% from the daily production of the Romanian car manufacturer.

During the three years since it was launched, 95% of the Duster units were exported, mainly in Western European countries.

Dacia prepares a facelift version for the Duster, which will most likely be presented at the Geneva Motor Show.