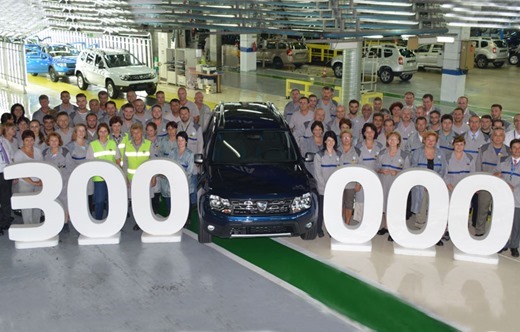 The 300,000th Duster facelift unit is a 4×4 with an 1.5 dCi engine with 110 HP with Blue Cosmos color and Laureate equipment, and is going to a client in Italy. In Romania, a 4×4 Duster facelift powered by a 1.5 dCi engine has a starting price of 17,100 Euro with all taxes included. Even five years after its launch, the Duster has not yet a rival in the true sense of the word, being both the most affordable SUV in its class on the market and the most capable model in this class when it comes to off- road capabilities.

“This round figure marks the commercial success of Duster two years after the launch of phase II. At the same time, the success of the work of Dacia and Renault Technologies Romania teams, who have the ambition to meet the most demanding automotive markets in the world offering an attractive and agile car, with better quality and reliability. Like all employees of Renault Romania, I am very proud to produce this beautiful car in Mioveni, in Romania, “said the Dacia Vehicles manager, Cornel Olendraru.