After establishing new order records for Dacia, the Duster continues the success story. Although it was criticized and praised by the international press, the Romanian SUV seems to defy the other important car brands even when it comes to international recognition.

Included in the list of 41 candidates for the title of European Car of the Year in 2011, the Duster has apparently convinced the jury made up of experienced journalists and managed to secure a deserved place in the grand final. Thus, the Dacia Duster brings the Romanian car manufacturer in the elite of the automotive industry alongside traditional car manufacturers like Alfa Romeo, Citroen, Ford, Nissan, Opel and even Volvo.

Dacia Duster was officially announced as one of seven finalists of the contest Car of the Year 2011 (COTY) alongside Citroen C3/DS, Alfa Romeo Giulietta, Volvo S60, Opel Meriva, Nissan Leaf and Ford C-Max.

The jury of the European Car of the Year consists in of 59 members, representing 23 European countries according to country size and importance in the automotive industry. The countries that have the most jury members are France, Germany, Great Britain, Italy and Spain, with six members.

"We are proud of the fact that Dacia Duster is among the seven finalists of the most prestigious automotive competitions in Europe. This selection confirms the qualities of a Romanian product that succeeded on the most demanding commercial Western markets: Germany, France, Italy. With over 80,000 orders worldwide registered, Duster is a tremendous ambassador of the Dacia brand and of Romania" said Fabrice Cambolive the commercial director of Dacia. 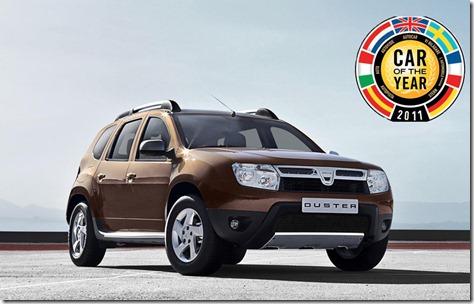