The Renault Group unveiled the new Dacia Duster Ice, the competition model that Alain Prost will run in the Andros Trophy in the 2010/2011 season. The Andros Trophy is a competition organized on ice and is composed of a 10-lap race with 10 competitors. The 2010 Dacia Duster model is equipped with the same 2987 CC V6 engine, but offers 350 HP and 360 Nm. The unit was produced by Renault-Nissan and was modified by the Renault Sport Technologies engineers. Compared with the previous unit, the new engine provides 20 Nm more at 3,000 rpm and is tuned for high torque at low speeds.

Dacia Duster Ice received a new set of shock absorbers, and a new special suspension system. The Duster Ice has a six-speed sequential transmission SADEV, all wheel steering, rear differential and limited-slip center. The vehicle mass is 950 kg and the fuel tank has a capacity of 25 liters. The wheels are made of magnesium, have a diameter of 16 inches and a width of 5.5 inches, while the tires are Continental Ice Racing Contact 3.

The Dacia Duster Ice receive discs on all wheels. In the front axle, the disc has a diameter of 260 mm and is ventilated, while the rear discs have a diameter of 265 mm and is not ventilated. Compared with the previous model, the Renault officials have noted significant improvements in performance, which should give Alain Prost a chance to win the title in the 2010/2011 competition season. 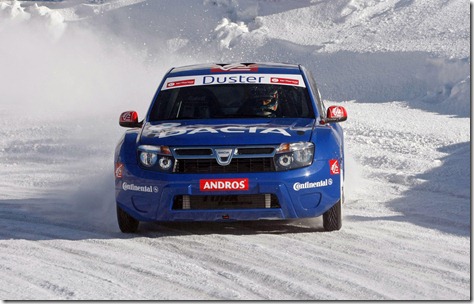